Was quite hilarious he definatly knew something....

good luck to enrique hes 36, and his hair piece gets plenty of action

Wow I will never get a wig but wow just goes to show what hair can do to your image. Then people say hair isn't everything, well image wise it's everything.
GotAccessToMyAccount
R

Of course its very important...

Ive looked like enriques 96 pic since my early 20s and thats exactly when girls stopped bothering to be interested in me... that hairless in his 96 pic makes him look like hes in his early 40s to mid 40s, just makes him look old and worn out.

Yet the pic with the wig makes him look like a 21 year old no wonder why all the girls are throwing there knickers at him.

Worst thing is since ive had laser surgery and my specs have come off people can now see my lovely sunglasses effect around my eyes, makes me look always tired and havent slept and like an 45 year old man !
R

Pretty similar but I got to about 23 before it happened. The dreaded girls aren't interested anymore and it's got f*ck all to do with confidence.

I wonder whether he is gonna try and keep that look into his 40s or he'll add a bit of recession. Best guess he's gonna push that well into old age! I can't blame him!
Click to expand...

Same with myself Id bet it was about 22-23 that my m8s were calling me front baldy.... but I sorta ignored it cos I had plenty of hair and I just felt it was a mature hairline.

Regardless of confidence had plenty of girls checking me out and talking to me before loosing my hair...

As usual none of my other 3 m8s I hanged around had any sign of hair loss, not that I was the oldest being 1977 dob.... so it was just what it was ! Other 3 m8s married and plenty of action apart from myself lol so just goes to show you the girls look at the hair on your head then below the belt and finaly your shoes

goodluck to Enrique Iglesias even in his 40s id bet hes gonna have even more girls throwing panties at him.

had heaps of girls checking me out before my hair loss...FML

:agree:
"our greatest glory is not in never falling, but rising each time we fall"

Then I guess hair must have been the only good feature in your looks guys.

It's not like girls care ONLY about hair. What about nice face, eyes, height, posture, confidence?

There are people whose best feature is hair. Iglesias would probably look not so bad bald. Sure, there would be some chicks (most of them immature <20 years old) who would be repulsed. But I think most of women would still consider him hot.

I know a guy who has a full mop of hair, which is undoubtedly one of his main advantages. He never shaves it, because he would look helluva weird because of his long thin head and big Jewish-like nose.

I think one of the best example of man who would pull ANY haircut well (well, maybe without grown out horseshoe...) is David Beckham. I think he's the example of guy where girls don't even care about his hair because his face and head is perfectly shaped, and it takes the attention from his hair.

But look at this a**hole: 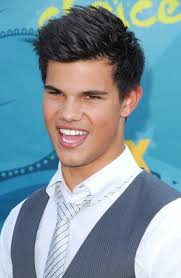 He's Taylor Lautner from Twilight or some other sh*t, girls mostly find him hot.
I think he's hideous enough with a full head of hair, but let's take away his hair from him. He would be even more disgusting because of his weird face.
T

DoctorHouse said:
I wish I was blessed with George Lopez hair. Most Hispanics have hair like him. Enrique is the exception to the rule.
Click to expand...

are you a girl? (serious question)
"our greatest glory is not in never falling, but rising each time we fall"

If Iglesias had this hugely receded temples back in 1996, then I guess he's full blown Norwood 6-7 under the wig by now

Will you be featuring news and information on Enrique's Wig a la the Bill Shatner's Toupee blog? http://shatnerstoupee.blogspot.com/

CCS said:
If 30 year olds are too boring for you, you should get some 20 year old friends. They are typically short on cash, but if you supply the cash for spray paint, they'll teach you how to tag up the town with them at night, that or just spray it into a bag and get high. That will make you the coolest 30 year old they know.
Click to expand...

DoctorHouse said:
I wish I was blessed with George Lopez hair. Most Hispanics have hair like him. Enrique is the exception to the rule.
Click to expand...

Enrique isn't Hispanic. He's half Filipino and half Spanish Jew.
Click to expand...

Seriously though Enrique is god.

CCS said:
Is green tea supposed to be green? Why is it that every bag I've bought makes brown tea?
Click to expand...

roki said:
im studying very prestijuos studys and when ill finish them ill allways be able to draw confidence from my edjucation
Click to expand...

To make a generalization: Latins generally have better (less loss) hair than European/Americans. Latin genes must be good...

My father who has very thinning hair is British and married my mom (American). They divorced and my dad remarried to a Chilean and had my step-brother. My step-brother has very latin features but I'm confident he won't be prone to the same hair-loss that I'm experiencing.
Always do your own research and analysis of recommendations. If possible talk to your doctor/dermatologist/hair specialist before beginning any treatments - if you're not happy with their advice, seek a second opinion.
C

monty1978 said:
. But he looks damn good with the wig let's face it so why the hat all the time?
Click to expand...

Wearing is not the most comfortable way to go. When I wore, I liked to take my piece off when know one was around to see. I'd sleep without it, and only put it on when I was going out. Even then, some days I'd wear a hat without it on underneath, just depending where I was going and how sure I was I could get away with it.
Support instant round robbin voting (Condorcet), which elects the candidate who would win every head to head race. Next best is Approval voting, which lets you vote for your favorite, or two you like equally, in addition to the lessor of evils you think you have to vote for, so you don't split votes like the current voting system. The major parties will always have power if voters are afraid to vote for any other than the big lessor of evils.
K

People have absolutely NO clue.

its scary to see how ignorant people are on the subject
"our greatest glory is not in never falling, but rising each time we fall"

Can't this be a combination of great responding to meds, hair transplant, comb-over and possibly some hair thickener/concealer?

Koga said:
Can't this be a combination of great responding to meds, hair transplant, comb-over and possibly some hair thickener/concealer?
Click to expand...

absolutely not...check this video on 720 p... it has a thick head of hair...besides sometimes his top hair looks thinner sometimes thicker...and it is the same length and the same haircut.also just think that he is almost 40 and he has pictures with big recession at 20...just to remind you this.
http://www.youtube.com/watch?v=CNUPSmQsIWA
You must log in or register to reply here.
Share:
Facebook Twitter Reddit Pinterest Tumblr WhatsApp Email Share Link
Forum software by XenForo® © 2010-2020 XenForo Ltd.
Top