Kevin Spacey with and without hairpiece

With hairpiece from his movie Beyond the Sea, in 2004: 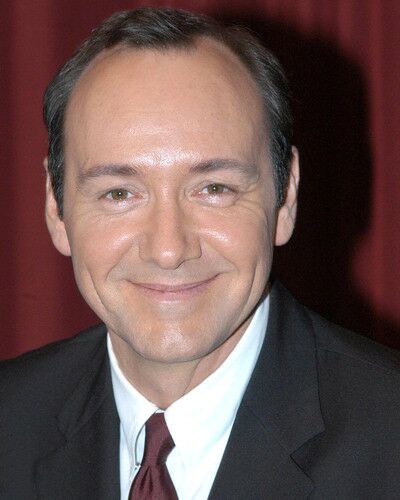 He has a very high quality hairpiece, and being a celebrity helps with that, but the difference is just staggering. If I were him I'd wear it all the time.

The dude is such a good actor that I don't even notice that he's balding. Sort of like Patrick Stewart. He could wear a clown wig and I wouldn't even notice.
My story -
G

docj077 said:
The dude is such a good actor that I don't even notice that he's balding. Sort of like Patrick Stewart. He could wear a clown wig and I wouldn't even notice.
Click to expand...

He's a good looking guy too. He had a shaved head in the Super Man movie and the shaved look definitely does not suit him either. It wouldn't suit him even if he was a Norwood 1. He looks much better as a Norwood 4 non-shaved than with the scalp look.

JayMan said:
If I were him I'd wear it all the time.
Click to expand...

I would'nt its an obvious rug. Maybe he should have a hair transplant to get him back to nw2.
*Voice of reason on HairLossTalk.com since 2007*

CCS said:
I don't need to marry the woman I'll get HM for that. just need to have fun for a month till she finds out, and have a fast turnover rate if she dumps me. If the piece looks good turnover shouldnt b a issue. Just break contact with her & her friends if she has a bigmouth
it is not your lack of drink, but muscles or face thats the reason. The only reason they'd want you to drink is so you focus on that and dont hit on them I don't even go to partys, at least not till I get more muscle on my arms.
Click to expand...


On a side note, I heard him on the radio in my town a few years ago and he seems like a real genuine person. Seems like a real good dude. Guy is such a fantastic actor he can make any bad move good, even that piece of trash Midnight in the garden of good and evil. That seems like the kind of move where the book would be great, anyone read it?
hltforums@yahoo.com

The problem with letting baldness continue for too long before getting a hairpiece or transplant is that when you do make a change it is noticeable. There is not much you can do when someone pulls out before and after pictures like Spacey's.
T

MichiganBaldy said:
He was awesome in Kapak too.
Click to expand...

I love this guy, my favorite actor actually. Personally I think the bald look suits him!
But remember he's done the bald look b4, in Seven.
T

However, there are some tell tale signs that can indicate to another that you are wearing a system. Now, I bring this up NOT to discourage people who are wearing systems, but rather to help you style your hair in a way that helps blend the system into your own hair better, for an outstanding look. I suppose this post is more aimed at new system users, as some of the more experienced folks out there probably have gotten these points down to an art already from their own experiences. I used to wear a system, for a while, so I speak from first hand knowledge.

Most system wearers when styling their hair are usually occupied making sure that the FRONT of the system looks good. Fact of the matter is that it is equally important to make sure the SIDES of the system are blended well. This is something that most system wearers tend to neglect, as mirrors don't usually give us a good side view of our hair to work with.

Let's take a look at the Spacey photo again...

Note the two red arrows I have drawn... they point to the line of separation between Spacey's system, and his more closely trimmed underlying temple hair. This is a common tell-tale sign of a system. Now, it is not easily noticeable, but upon a closer examination somebody might stumble upon it. It is easily avoided by paying a bit more attention to the feathering on the temples. Perhaps the use of a little gel to separate and add texture to the longer locks from the system would blend it in better with the shorter natural hair.

Another trouble area is the upper temple, as this is typically where the system has an anchor point that keeps the front lace down and flat on the scalp. The blue arrow points to the area where buckling can occur, and be a bit more visible to an onlooker. Spacey's stylist obviously did an excellent job of eliminating any detectability, but for me this is the area that seemed to be the most trouble. A week or two of hairgrowth, plus lapse of vigilance, and this is where it starts to show.

Anyways, I guess my overall point is that a great system is not only about the system itself, but it is also about styling it in a way that maximizes the benefits of the system, and simultaneously minimizes the areas that can be trouble spots.
Bring Amber Lamps

check out his movie 'the weatherman' or 'lord of war' ...he looked pretty cool in lord of war
My motto: Hope for the best and expect the worst

The look and style of the hairpiece may have something to do with the fact that the movie is based on Bobby Darin, who, in fact, wore a hairpiece.