Alopecia Areata Or A Final Infection

So I went to get routine haircut at new barbershop for my 25th birthday. During the cut the guy said I had a small bald spot, but he said this towards the end of my cut why he was shaving my part line with a straight razor. I thought he just messed up. After a few weeks, the spot grew. Went to the derm. Said it's possible I have alopecia areata but wasn't sure. Injected it with cortisone. 2 weeks later another spot on the back of my head. A week after, immense dadruff, scaling, flaking and itching. Went back the derm. Took scale samples. Negative for fungus. But because I had black dots on bald spots, scaling, flaking, and dandruff. They for sure thought it was fungal. Gave me terbinafine. I took one pill and then called another derm at the Cleveland Clinic. Performed scalp biopsy, after negative pull test, negative for exclamation hairs, negative for barcode hairs. Biopsy reads as follows:
A. Histologic sections show a relatively unremarkable epidermis. Within the
dermis, is a mild periadnexal inflammatory infiltrate surrounding the
isthmus portion of the hair follicle as well as the peribulbar region.
Miniaturization of terminal hairs is noted with fibrous tract remnants.
Peribulbar hemorrhage is seen as well as pigment casts within the hair
shaft. Naked hair shafts are seen within the dermis. Follicular cysts and
dilated follicular ostia filled with bacteria and yeast forms are seen. No
dermal fibrosis or scar is seen.

In summary, the histologic features are those of a nonscarring alopecia.
The presence of miniaturization
of hairs, peribulbar hemorrhage and pigment
casts is compatible with trichotillomania. The peribulbar inflammation and
miniaturization also includes alopecia areata within the differential
diagnosis. This case may have a combination of trichotillomania and
alopecia areata.

So as you can see I don't have any physical symptoms of AA but more of TTM. But I DO NOT PULL MY HAIR OR ALTER IT IN SNY WAY.

After this I had more cortisone injections. And then I just finished one treatment of PRP therapy with no success yet. I have four more spots now. The original the size of tennis ball, the second the size of tennis ball the others are getting there. I have itching, darndurff, my hair is dry, brittle, it breaks off I have hair that is in the shape of a perfect zigzag. Literally a perfect zigzag. I also have very dry, flaking skin on my scalp. I lose immense amounts of hair in the shower. I can barely put shampoo in it. Is it possible the biopsy was wrong? I mean they are just shoving it off as AA because I told them I don't pull my hair, which I don't. I really don't want to have another biopsy done. But I have yet to hear someone with AA say they have dandruff like this. Also my spots aren't perfectly bald or smooth. There are black dots, and very few hairs that look like they just got weak and broke off. I need someone's advice. I find it uncoicidental that this all happened so suddenly after I visited a new barber. Especially because I had such thick, beautiful hair before this cut. No doctors have cultured my hair. Or scaling. No doctors put it under a Woodards lamp. I'm honestly at a loss. Also, there is no redness. On the spots. Please someone help. Thank you.
Last edited: Nov 10, 2017
I

Definitely alopecia arreta. If it was trichotillomania, as you know, you'd have to pulling your hair own, which you're not.

If you had Tinea capitis (fungal infection) it wouldn't be showing up in new circles all over your scalp. Also tinea capitis won't cause your hair to fall out in discrete chunks like that. FUngal infections cause more gradual inflammation and hair loss.

You'd start with some flaky/red patches diffusely through your head like this:

And only if they weren't treated for a while would the hair all die in those areas. 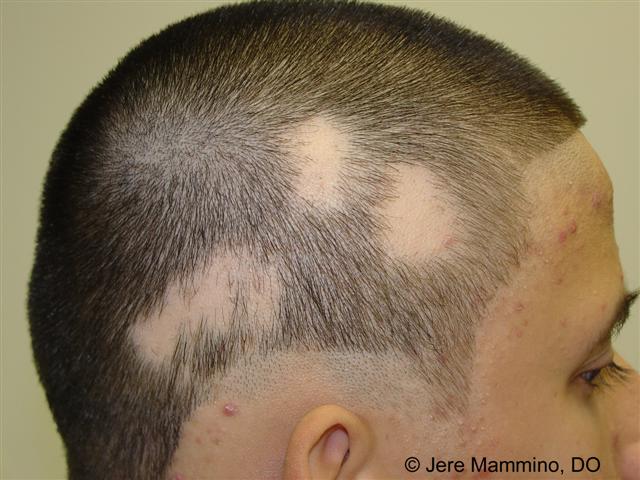 As you can see the skin is perfectly healthy. It's just missing chunks of hair.

On the plus side alopecia arreata has had a bunch of oral drugs lately that have allow many to get full recoveries. Continue the steroid injections for now. you can try minoxidil topically as well. If that fails, try some oral immunomodulating meds.

The diffuse dry flaking scalp is likely an unrelated condition called seborrheic dermatitis. Treatment for that is Nizoral shampoo. Pick some up and start using it. Let it soak on your scalp for 5 minutes before rinsing.
F