Hair loss is not just a problem for men alone. One out of every four women in the United States experiences hereditary hair loss, and for that one woman, hair loss can feel like a first class cosmetic disaster. The causes and symptoms of hair loss in women can be different than those associated with men. Below, two dermatologists discuss the differences between male and female pattern baldness.

How common is hair loss in women?

NEIL SADICK, MD: The incidence of hair loss in women is almost parallel to that in men. However, in women, usually the degree of hair loss is not as extensive as it is in the male population.

So are they hiding it better than men?

NEIL SADICK, MD: Luckily, their genes do not express the trait to the same severe degree as men. There is the same amount of thinning in terms of numbers of women compared to men, but the degree of hair loss is usually not as severe as it is in the male population.

What are the differences in the cause of hair loss in women, as opposed to men?

MICHAEL REED, MD: Most women lose their hair for the same reason that men do-genetics. It’s called female pattern balding, as opposed to male-pattern balding, but both refer to what is called androgenetic alopecia in women, which means hair loss caused by a sensitivity to male type hormones, which men and women both have. Women are more protected by estrogen for a period of time, but the cause is the same. It’s just that they have it happen later, it goes more slowly, and the pattern is such that it’s easier to cover it up than it is for men. If I lose half my hair and it’s on the top of my head, I’m going to be bald. If I lose half my hair and I’m a woman, it’s diffused all over my head, so it’s just going to be thin hair or “see-through hair”.

Are there some myths that women have about what could cause their hair loss? Washing their hair too vigorously?

NEIL SADICK, MD: People feel that anything will cause the hair loss to accelerate-such as emotional trauma, washing their hair too often, poor diets-but those truly are myths.

How can a woman tell if she’s actually losing her hair?

MICHAEL REED, MD: It’s said that we have to lose 50 percent of our hair in any given area before it starts to be noticeably thin, but a lot of women notice it long before then. There are very few people with delusions of hair loss. They can just tell by the texture, by the body, that it’s not the hair it used to be. Finally, though, it gets to the point where they begin to see scalp and not hair. Especially in women, right behind the hairline they tend to get a round or oval-shaped area that gets very, very thin, and those women seek treatment.

What is the second most common cause of hair loss in women?

NEIL SADICK, MD: Telogen effluvium, which is where the hair goes into a resting or shock phase after any type of insult. The most common cause of this type of resting hair shedding is pregnancy.

Three to six months after delivering a child, many women will notice a great degree of hair loss as the hair cycles into a resting phase because of the physiologic insult of pregnancy. This can also occur quite commonly in women who are on crash diets and lose a great deal of weight over a short period of time, or after acute illnesses, such as an acute infection.

Anything that puts stress on the body can cause the body to recycle its hair into a resting phase and cause acute hair shedding, called telogen effluvium.

Does the body then recover into a normal growth cycle?

NEIL SADICK, MD: Usually. Because the body is able to compensate for this insult, usually three to nine months after the insult, the hair will begin to regrow, and usually in most cases between 90 and 100 percent of hair regrowth can be expected.

What is the third most common cause of hair loss in women?

MICHAEL REED, MD: The third most common cause that we see in clinical practice is a condition called alopecia areata. Areata is Latin for “round” or “circumscribed”, which means that people suddenly see bald spots here or there, or little, tiny short hairs that are broken off. Sometimes it’s noticed by the person cutting their hair.

It’s often related to some stressful event, and it’s believed to be some type of immunologic imbalance. The immune system goes after its own hair for some unknown reason, causing them to go into the resting phase and slow down their growth so they break off or come out. A lot of times, it regrows by itself. In fact, most people who have it don’t come to the doctor.

Where can women go to find more information about hair loss?

NEIL SADICK, MD: People can consult the American Academy of Dermatology. There’s the International Society of Hair Restoration Surgery. There is the National Alopecia Areata Foundation, and there’s also a National Hair Council. So these are common information sources that patients can look to for help and support in dealing with their particular problems.

But the first place to start may be a dermatologist?

MICHAEL REED, MD: If the hair loss has any unusual features-suddenly a lot of hair is coming out, if hair is coming out in a bizarre or unusual pattern, even if it’s very severe, premature general thinning of the scalp, see a dermatologist. Dermatologists are trained in medical-and some of them also in surgical treatment of hair loss. They’re the people to see first. 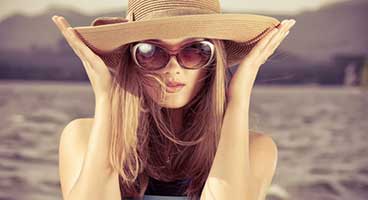 Find out the causes, and treatments for all forms of hair loss in Women. Get answers today.