A Look at HairCell: Company & Claims

A little more information about a new company known as HairCell, which HairLossTalk user Xaser94 previously posted a thread about in our forums: HairCell – Full Hair Regeneration. At this stage its difficult to tell if this is a genuine hair loss research effort or a marketing venture, but lets look at what’s on the table.

In their provisional patent, they describe the treatment as:  “A method and apparatus for producing hair growth stimulation using bioelectric energy, topical compositions, stem cell/growth factor micro infusions and combinations thereof. By using bioelectric signaling resulting from specific protein expressions and their cellular responses to exposure to specific micro voltages.” 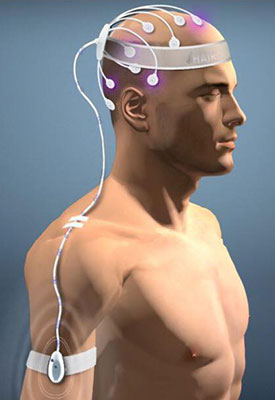 So as you can see, its not just a bunch of electrodes taped to your scalp, but also includes growth factor infusions, which are currently being studied by several other teams on the “legit” front.  The device itself seems to be an electrical stimulating device, intended to have an activating effect on stem cells, and likely circulation, which they hope contributes to the growth of new hair.   Such devices have been attempted in the past (without the stem cell claim, and not in combination with growth factor infusions) and shown to be ineffective in the treatment of hair loss.  So people are keeping a cautious eye on this treatment, and waiting for reproducible study data before raising hopes.

As per Xaser, there also seems to be a very public money-making plan in place which may be based on first obtaining legit results from clinical trials they plan to perform:  “They happen to be trying to stimulate hair follicles using some of the same growth factors as Histogen, and are using their own novel delivery method.  I found this slide show they released recently, and they happen to say some interesting things:

“On slide 5 headlined Business Model, they claim they will complete a pilot study of 20-100 patients. The same slide also says “Focus on patents, data, opinion leader endorsements and positive press and then with pilot study data on hand > sell.”

“Their goal seems to be to sell off the technology or partner with someone else, and then have a different company complete the clinical trials. On slide 10, they have a goal of presenting data on February 2017 of their fist 20 patients, and then complete 100 patient trial by July 2017. They also claim their potential competition is Samumed, citing “only 10% regrowth.”  Their goal however seems to be complete regeneration of a full head of hair and their willingness to put their weird looking contraption through clinical phase trials makes me think its not a scam like those laser helmets.”

Looking further into this company, you can see on their Vimeo page that the video is labeled:  “Calx Stars Business Accelerators” which is a name indicative of investment and money making goals.  More revealing however, may be the fact that this ‘XXXCell’ term isn’t just for a hair growth device.  They are apparently making the same claims for numerous other ailments, as can be seen in this listing of their videos:  CancerCell, AortaCell, PancreaCell.

Xaser went on to say:  “I found this on the parent company’s website (Leonhardt Ventures – Our Companies).  Simple Business Plan:

* Get as many patents as possible.
* Prove technology works hopefully in at least 20 human patients.
* Get opinion leader endorsements through educational showcases, one on one meetings and small panels.
* Get positive press.
* File with regulatory bodies to start Phase II clinical trials.
* THEN SELL = Begin auctioning off to strategic partners or buyers starting in May 2018 with intention to have all of them partnered or sold by the end of 2019.

Purely looking at this from a scientific perspective, if they begin Phase 2 trials by the end of 2017 (around the time they plan to sell), then this device would be on track for release around 2020. It would be prudent to also question the study methods, and any conflicts of interest that may be present by those who conduct the study. Either way, a simple at-home solution would be better than current options like invasive hair transplants.  HairCell makes reference to several studies backing the effectiveness of the device:

http://www.ncbi.nlm.nih.gov/pubmed/22052313
Study showing increased hair growth after injection of a solution containing Follistatin and other wound-healing growth factors.  How this relates to their electrical device, or what methods will be used for the aforementioned “infusion” is yet to be seen. We will keep you updated as to the status of this potential new treatment for hair loss, and of course will keep a critical eye on the claims being made.

Hair Cloning – What will it be all About?