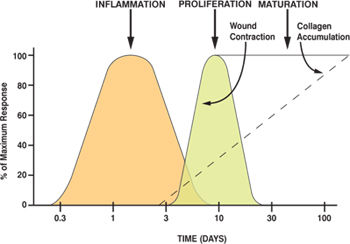 
Whether wounds are closed by primary intention, subject to delayed primary closure or left to heal by secondary intention[SUP]1[/SUP], the wound healing process is a dynamic one which can be divided into three phases. It is critical to remember that wound healing is not linear and often wounds can progress both forwards and back through the phases depending upon intrinsic and extrinsic forces at work within the patient[SUP]2[/SUP].

The phases of wound healing are[SUP]2[/SUP]:

The inflammatory phase is the bodyâ€™s natural response to injury. After initial wounding, the blood vessels in the wound bed contract and a clot is formed. Once haemostasis has been achieved, blood vessels then dilate to allow essential cells; antibodies, white blood cells, growth factors, enzymes and nutrients to reach the wounded area. This leads to a rise in exudate levels so the surrounding skin needs to be monitored for signs of maceration. It is at this stage that the characteristic signs of inflammation can be seen; erythema, heat, oedema, pain and functional disturbance. The predominant cells at work here are the phagocytic cells; â€˜neutrophils and macrophagesâ€™; mounting a host response and autolysing any devitalised â€˜necrotic / sloughyâ€™ tissue.
During proliferation, the wound is â€˜rebuiltâ€™ with new granulation tissue which is comprised of collagen and extracellular matrix and into which a new network of blood vessels develop, a process known as â€˜angiogenesisâ€™. Healthy granulation tissue is dependent upon the fibroblast receiving sufficient levels of oxygen and nutrients supplied by the blood vessels. Healthy granulation tissue is granular and uneven in texture; it does not bleed easily and is pink / red in colour. The colour and condition of the granulation tissue is often an indicator of how the wound is healing. Dark granulation tissue can be indicative of poor perfusion, ischaemia and / or infection. Epithelial cells finally resurface the wound, a process known as â€˜epithelialisationâ€™.
Maturation is the final phase and occurs once the wound has closed. This phase involves remodelling of collagen from type III to type I. Cellular activity reduces and the number of blood vessels in the wounded area regress and decrease.
http://www.clinimed.co.uk/Wound-Care/Education/Wound-Essentials/Phases-of-Wound-Healing.aspx

[h=1]Transgenic mice as a model to study the role of TGF-beta-related molecules in hair follicles.[/h] There is increasing evidence that members of the TGF-beta superfamily are important regulators of epithelial growth and differentiation in vivo. Here, transgenic mice have been used to study the role of the TGF-beta-related growth factors BMP-2 and BMP-4 in hair and whisker development. In the mature hair follicle, BMP-2 transcripts are normally seen only in precortex cells at the base of the hair shaft. In the transgenic mice reported here, BMP-4, a closely related molecule, has been ectopically expressed in the outer root sheath of hair and whisker follicles using an expression vector based on the bovine cytokeratin IV* promoter. In response to transgene expression, both outer root sheath cells below the stem cell compartment and hair matrix cells around the dermal papilla cease proliferation. In addition, the expression pattern of cytokeratin markers is disturbed in some transgenic hair follicles. These results support a model in which members of the TGF-beta superfamily play an active role in the inhibiton of cell proliferation and the onset of expression of trichocyte-specific genes that take place when cells leave the matrix of the follicle and differentiate into shaft cells.
http://genesdev.cshlp.org/content/7/2/204.short

[h=1]A novel TGF-beta antagonist speeds reepithelialization and reduces scarring of partial thickness porcine burns.[/h] Scar formation after thermal injury is common and results in significant aesthetic and functional impairment. Transforming growth factor beta (TGF-beta) plays a significant role in scar formation. We tested the hypothesis that a novel TGF-beta peptantagonist would reduce scar formation and wound contraction in partial thickness burns by using a randomized controlled experiment. The subjects include two domestic pigs (20-25 kg). Forty burns were created on the animal's dorsum using an aluminum bar preheated to 80 degrees C and applied for 20 seconds resulting in a partial thickness thermal burn extending half way down the dermis. Burns were treated every other day for 1 week, then twice weekly for 3 weeks with a topical TGF-beta antagonist or its vehicle. Full thickness biopsies were obtained from all burns at 7, 10, and 14 days after injury. The wounds were completely excised after 28 days for histological assessment. Wound sections were stained with H&&E and evaluated by a dermatopathologist masked to treatment assignment for reepithelialization and depth of scar formation. We also determined the number of wounds at 28 days that healed with contracted, hour-glass shaped scars. Data were compared with chi and t-tests. Twenty burns were treated with TGF-beta antagonist and 20 with control vehicle. TGF-beta antagonist increased the percentage of completely reepithelialized wounds at 14 days (90 vs 45%, P = .002) and reduced the percentage of contracted wounds (35 vs 65%, P = .02) and full thickness scars (10 vs 60%, P = .002) at 28 days. Treatment of partial thickness porcine burns with the TGF-beta antagonist speeds reepithelialization and reduces scar formation and wound contraction in partial thickness porcine burns.
http://www.ncbi.nlm.nih.gov/pubmed/19165091
Synthetic TGF Beta antagonist accelerates wound healing and reduces scarring
http://www.fasebj.org/content/16/10/1269.short
[h=1]Role of TGF-beta2 in the human hair cycle.[/h] Male pattern baldness is the result of premature entry into catagen due to androgens. In order to prevent hair loss, it is important to understand two critical steps, i.e., the induction mechanism of premature entry and the regression process of catagen. At the initiation, dihydrotestosterone (DHT) stimulates synthesis of transforming growth factor-beta2 (TGF-beta2) in dermal papilla cells. TGF-beta2 suppresses proliferation of epithelial cells and stimulates synthesis of certain caspases. Then TGF-beta2 triggers the intrinsic caspase network and subsequently epithelial cells are eliminated through apoptotic cell death. TGF-beta antagonists are effective in preventing catagen-like morphological changes and in promoting elongation of hair follicles in vivo and in vitro.[SUB]These lines of evidence strongly suggest the presence of a "catagen cascade" in male pattern baldness, involving: (1) the conversion of testosterone to DHT by type II 5-alpha-reductase; (2) the synthesis of TGF-beta2 in dermal papilla cells; and (3) the activation of the intrinsic caspase network. These sequential events contribute to the shortening of the human hair cycle.[/SUB]
http://www.ncbi.nlm.nih.gov/pubmed/15194142
[h=1]TGF-β signaling in vascular fibrosis[/h] Transforming growth factor-β (TGF-β) participates in the pathogenesis of multiple cardiovascular diseases, including hypertension, restenosis, atherosclerosis, cardiac hypertrophy and heart failure. TGF-β exerts pleiotropic effects on cardiovascular cells, regulating cell growth, fibrosis and inflammation. TGF-β has long been believed to be the most important extracellular matrix regulator. We review the complex mechanisms involved in TGF-β-mediated vascular fibrosis that includes the Smad signaling pathway, activation of protein kinases and crosstalk between these pathways. TGF-β blockade diminishes fibrosis in experimental models, however better antifibrotic targets are needed for an effective therapy in human fibrotic diseases. A good candidate is connective tissue growth factor (CTGF), a downstream mediator of TGF-β-induced fibrosis. Among the different factors involved in vascular fibrosis, Angiotensin II (AngII) has special interest. AngII can activate the Smad pathway independent of TGF-β and shares with TGF-β many intracellular signals implicated in fibrosis. Blockers of AngII have demonstrated beneficial effects on many cardiovascular diseases and are now one of the best options to block TGF-β fibrotic responses. A better knowledge of the intracellular signals of TGF-β can provide novel therapeutic approaches for fibrotic diseases.
http://cardiovascres.oxfordjournals.org/content/74/2/196.full
[h=1]Effects of minoxidil on cultured human skin fibroblasts.[/h] Two important findings related to the effect of minoxidil on human skin fibroblasts in culture are reviewed. Treatment of cells with minoxidil is associated with a specific loss of lysyl hydroxylase activity; this loss occurs gradually and is reversed by removing minoxidil from the culture medium. Experiments with inhibitors of protein and RNA synthesis reveal that minoxidil may inhibit the synthesis of lysyl hydroxylase by acting at the transcriptional level. Treatment of cells with minoxidil is also associated with inhibition of proliferation, without any sign of cytotoxicity. This effect of minoxidil is accompanied by inhibition of DNA synthesis. Since collagen is the major product of fibroblast activity and lysyl hydroxylase catalyzes a crucial reaction in collagen biosynthesis, the combined effects of minoxidil offer the potential for its use as an antifibrotic agent. Thus, minoxidil may prove to be beneficial in treating skin conditions associated with collagen accumulation.
http://www.ncbi.nlm.nih.gov/pubmed/2826267

Use of minoxidil for wound healing
A method for the promotion or acceleration of wound healing by a treatment with minoxidil is disclosed. The minoxidial can be administered by topical application, oral administration, injection or any combination thereof. Treatment with minoxidil is effective for promoting the migration of epithelial cells in a wound or in tissues such as cornea and the like. Methods for identifying binding sites for minoxidil in cells based on their affinity for the compound in attachment or chemotactic assays are described.
http://www.google.com/patents/US4912111