Thai HM on market? (not sure though)

i have stumbled across this thing called Adistem
the thing is that it's actually available now...
http://www.adistem.com/application/hair-growth.htm

seems quite legit but i don't want to say it is, unfortunately this is a cruel market

Re: Taiwanese HM on market? (not sure though)

The thread title said Taiwan, which was actually fairly promising. It's actually Thailand - the home of cheap and often botched surgical operations. If Western scientists couldn't perfect the procedure, I'd be surprised if Thailand's could.

Im pretty sure one of the better hair transplant Doctors operates out of Thailand. So i wouldnt call it all bad.

i would say at least some of the trials were done in countries with standards, but usually more standards = more time before treatment can be legally administered

Any test bunnies?1 :whistle:
What did you just call me? Say my name!

Granted they don't require the same FDA regulations, but in this case I don't think that portends success. If the procedure were established and just waiting for approval, I might buy it. As it stands, even the most cutting-edge researchers in the West are still at the stage of proving its effectiveness.
R

wat is the 3rd product

ragsta said:
yea but they have proved that it works wonder if they know about this

you don't buy them

you have to go to a clinic that would administer it
well unless you have some sterile needles, a medical licence (the won't sell it otherwise) and a centrifuge 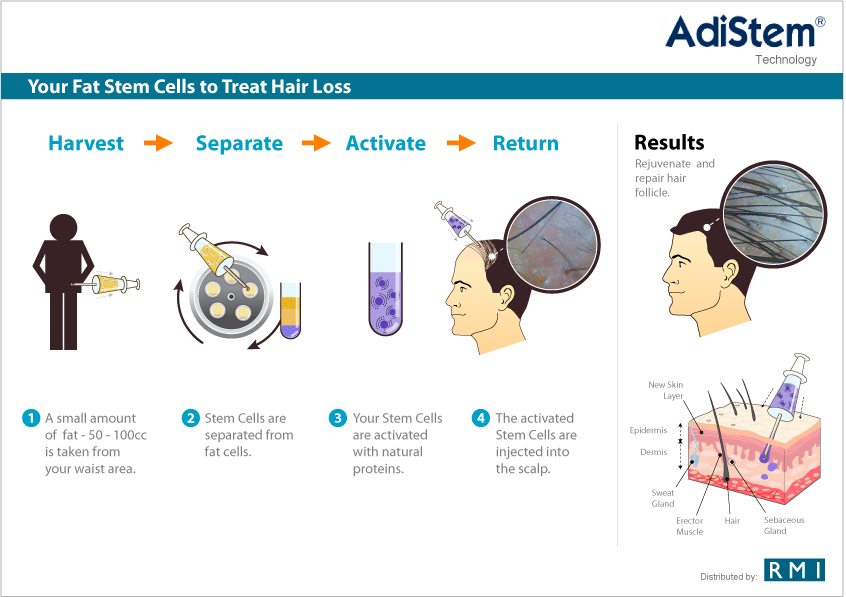 they had a youtube of the procedure, but they took it down for some reason :dunno:

anyone here with lots of money and nothing to lose? :whistle:

I'll contribute money to the guinea pig that tries it
What did you just call me? Say my name!

They do show a photo here:
http://www.adistem.com/application/hair-growth.htm

One thing that concerns me is that there is no address listed on the website. Another is that they self-proclaim to be a major biotech company, but don't even have a wikipedia page. No one has heard of them. If they have a cure we will all know pretty fast.

Seriously...they don't have a cure. Histogen are trialling their technology right now. Intercytex didn't get theirs much further than Phase II, and results appeared mixed even then. The notion that some biotech company based in Thailand, which nobody has ever heard of, and which nobody has seen mentioned at dermatological conferences or in international journals, has all of a sudden managed to perfect HM, is just preposterous. It's Thailand. That's a scam warning right there.

Boondock said:
Seriously...they don't have a cure. Histogen are trialling their technology right now. Intercytex didn't get theirs much further than Phase II, and results appeared mixed even then. The notion that some biotech company based in Thailand, which nobody has ever heard of, and which nobody has seen mentioned at dermatological conferences or in international journals, has all of a sudden managed to perfect HM, is just preposterous. It's Thailand. That's a scam warning right there.
Click to expand...

well i don't want to say they are based in thailand, it's just where the treatments are available, they don't have the FDA red tape like the us or the even worse European counterpart impeding it.
if you look at the list the countries trials are being held it includes countries like South Korea and Germany

also adistem, histogen and intercytex are different technologies, and technically only intercytex and ARI are cures because they are the only ones that guarantee the hair is without androgen receptors
and btw in the USA stem cells have already been used to cure AA but only as goodwill gestures rather than a marketed treatment because of course the FDA would throw the book at them if they did
the idea that stem cells are used to cure CHILDREN of hairloss and then for the same people to say "it needs testing to prove it's safe and effective" whist showing children with thick hair and not dead or sick shows this self defeatist attitude people trying to cure baldness have

i think adistem is hong kong based and like others have, licensee's scattered around
J

Wow ! Just take some fat from your waist , put it in a centrifuge + put some fish in it and inject into scalp! New hair ! Why haven't we done this sooner ?
Brb , going to throw away minoxidil ...
K

Seriously.... no one can find much info on them - they've made this amazing safe breakthrough all tested and complete - they have no address and have one picture showing these amazing results.

Show me all the satisfied patients, show me the proof.

This is just Protein Rich Plasma.

CCS said:
If 30 year olds are too boring for you, you should get some 20 year old friends. They are typically short on cash, but if you supply the cash for spray paint, they'll teach you how to tag up the town with them at night, that or just spray it into a bag and get high. That will make you the coolest 30 year old they know.
Click to expand...