The user Dorzry posted pictures of his less than 2 months results and they are great!

Left Temple (Before / After): 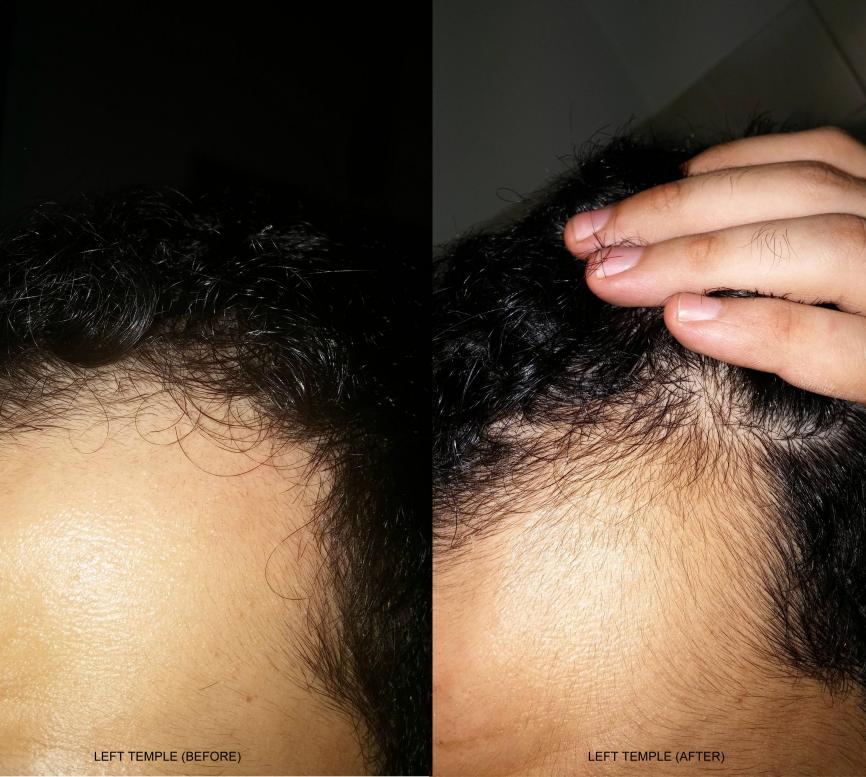 Right Temple (Before / After): 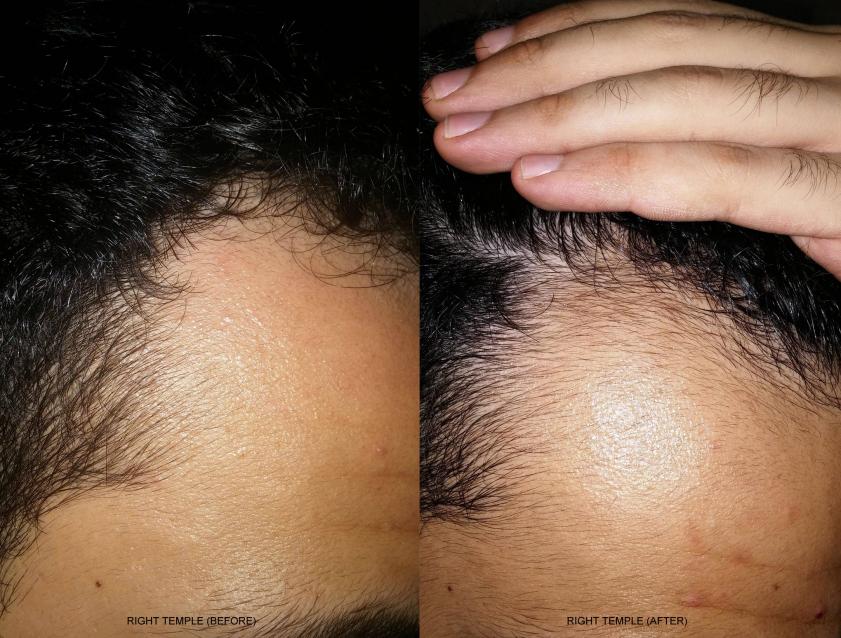 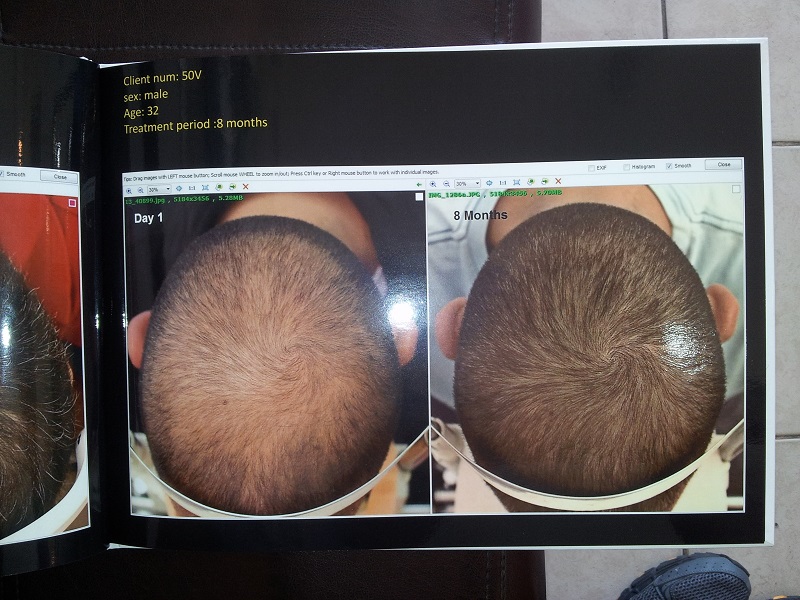 What are the results of treatment with the device and how much time you can see them?

Different people come to different results, although for obtaining the result differs from person to person, however the company stands behind the results are a minimum of 30% improvement within 4 months of using the device. Hair re-growth and thickening of existing hair thickness.
Click to expand...

Whether the treatment leads to hair regrowth in every situation?

The device works on the basis of the body's ability to rebuild itself. He sums up the healing potential of each and every one according to the initial condition of the hair with the start of use of the instrument. Hairegen classic clock dormant hair follicles with rehabilitation potential.
However, the icing conditions in view of medical problems or extreme emotional stress, interfering with the rehabilitation of the device.
For this reason, offers Dimdiko eligibility assessment and coordination of expectations, without obligation before purchasing.
Click to expand...

How does the device Hairegen Classic work?

The development of an instrument Hairegen Classic is based on medical research from the field of dermatology (Dermatology). Studies have shown that the main cause of hair loss in men and women is the sensitivity of hair follicles to the hormone testosterone Hdihidro ((DHT.

Classic Hairegen device affects the main causes baldness and helps rehabilitate the scalp and hair follicles. The device operates locally and generates direct and quick response, without side effects.

The Hairegen Classic includes several mechanisms for handling designed to work together to neutralize the hair follicle degeneration process, increasing the supply of nutrients and oxygen through stimulating circulation and improving "living conditions" of hair by reconstruction and thickening the scalp and blood vessels.

The device operates in three different modes in order to stimulate the scalp and hair follicles: electrical excitation, excitation biochemical and physical-mechanical excitation. Three operations are performed simultaneously, locally and intense for a few minutes daily basis.
Scientific background behind the development of Hairegen Classic
According to studies, about 90% of men and 45% of women suffer from a decline in the quantity and density of hair throughout their lives. Among men, the process can lead to complete baldness and thinning hair in women at various levels in all regions of the scalp.

The process of thinning out the hair and baldness blood vessels that feed the hair shrink, the skin becomes thinner and created significant shortages of food and oxygen needed for growth of its healthy, abundant hair. Natural hair gradually degenerates and is replaced by a thin hair lacks pigment, similar to Paloma, until the production is entirely due to incessant hair follicle degeneration.
Three operations (electrical, biochemical and mechanical) are made ??simultaneously and synergetic effect in order to make a gradual degeneration of hair production mechanisms, the process of renewal and reconstruction, depending on the initial state and the individual potential of each user.

Electric action
By a disc at the top of the handle, in contact with the scalp while Gilgoln, streamed micro-currents. This unique mechanism, patented, stimulates the follicles and the skin natural regeneration. It is noteworthy that, gentle micro-currents and are not dangerous, and advanced medicine, made many uses micro-currents and streams therapeutic purposes, inter alia, in the field of skin and orthopedics.

Biochemical action
Studies show zinc and copper inhibit the activity of the hormone DHT and many dermatologists recommend taking zinc as a treatment for baldness pills. Hairegen Classic enters directly scalp and controlled small amount of zinc ions and copper (zinc-coated instrument washers and copper and inject them in a targeted area of ??the patient).

Mechanical operation
When rolling the head of the device on the scalp, created thousands of tiny pressure points, which combined with vibration mechanism, massaging the scalp and stimulate blood flow to the treated area immediately and significantly.
In addition, the gentle pressure of the disc on the scalp and vibration mechanism, intended to stimulate the nervous system to send signals to the brain, activates self-healing mechanisms of the body.
Click to expand...

Yeah from Israel? No kidding... 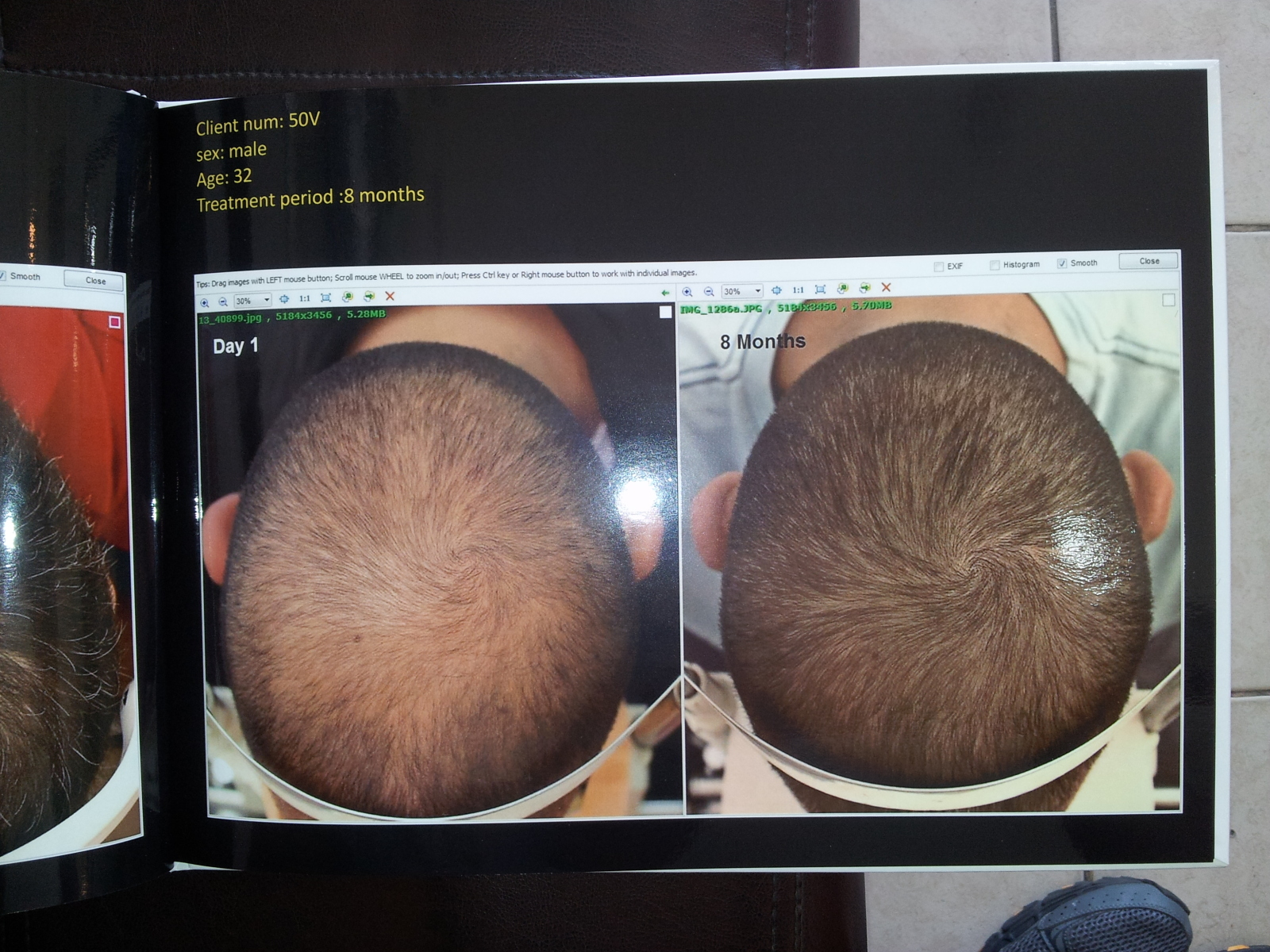 WOw
it looks a lot better than minoxidil
when does it cme out in australia/globally?

That photo was one from the hairdresser if anyone still remembers the story and the album.

It's a device. No snake oil.

There was a long involved thread on this two years ago, i am waiting for those people involved in that discussion to shime in, what was the consensus back then? I remember it was not great...i mean by that some people questionned the hinesty of the company, can't remember the details..
Some kind of happiness is my measured out in grafts.

Guys, it's all nice - but where and how can this be bought and tested?

In 2009, Professor Dov Aingmn, a renowned professor from the Technion, signed on the development of a number of patents, exploring the theme of technology development for the treatment of baldness. Prof. Aingmn unveiled his vision for product development and technology working to restore full functionality animals and dormant hair follicles and was the first experimenter development, as balding hair for genetic reasons. The months passed and the amazement of those around and the family, a theory that has proven itself and introduced new hair began to grow in the head.

The surprising results led many investors and patients interested in the product and its development. For this purpose, founded by Prof. Aingmn, along with scientists, development and management of the Fiilogi'ks.

The first prototype of the device was distributed in 2010 to dozens of men and women with thinning hair, alopecia and increased dropout. The results were not long in coming: the new hair began to grow in diluted, hair thickness and growth rate increased, flexible and scalp became thicker, growth came in areas of baldness and users reported significant improvement continued with continued use of the device.

In view of success, continued Filogi'ks develop the technology and test it for hundreds of other users, and finally developed commercial product for home use as it is today: the classic Hairegen


Abstract
The human body has its own innate electrical system that regulates the body's functions via communications among organs through the well-known neural system. While the effect of low-level electrical stimulation on wound repair has been reported, few studies have examined the effect of electric potential on non-wounded, intact skin. A galvanic couple comprised of elemental zinc and copper was used to determine the effects of low-level electrical stimulation on intact skin physiology using a Dermacorder device. Zn-Cu induced the electrical potential recorded on intact skin, enhanced H(2)O(2) production and activated p38 MAPK and Hsp27 in primary keratinocytes. Treatment with Zn-Cu was also found to reduce pro-inflammatory cytokines, such as IL-1?, IL-2, NO and TNF-? in multiple cell types after stimulation with PHA or Propionibacterium acnes bacteria. The Zn-Cu complex led to a dose-dependent inhibition of TNF-?-induced NF-?B levels in keratinocytes as measured by a dual-luciferase promoter assay, and prevented p65 translocation to the nucleus observed via immunofluorescence. Suppression of NF-?B activity via crosstalk with p38 MAPK might be one of the potential pathways by which Zn-Cu exerted its inflammatory effects. Topical application of Zn-Cu successfully mitigated TPA-induced dermatitis and oxazolone-induced hypersensitivity in mice models of ear edema. Anti-inflammatory activity induced by the Zn-Cu galvanic couple appears to be mediated, at least in part, by production of low level of hydrogen peroxide since this activity is reversed by the addition of Catalase enzyme. Collectively, these results show that a galvanic couple containing Zn-Cu strongly reduces the inflammatory and immune responses in intact skin, providing evidence for the role of electric stimulation in non-wounded skin.

I sent them an email - but no response so far. How can we order it and what is the price?
B

newplayer said:
I sent them an email - but no response so far. How can we order it and what is the price?
Click to expand...

Looks like a sham tbh since it is from Israel. Only good thing to come out of there is bar refaeli

Your statements are contradictory. If you think really hard, do you still believe its fruitful to put up a scam where no one knows where to buy the product?
B

Your kidding right? Israel has some of the most advanced and successful companies in the world. They have the highest number of Nobel prize winners per capita.
B

TheShining said:
Your statements are contradictory. If you think really hard, do you still believe its fruitful to put up a scam where no one knows where to buy the product?
Click to expand...

I meant that I think it is some sort of local scam in Israel like the crap I see in my country. Obviously I know where to buy the product but people overseas would not.


brunobald said:
Your kidding right? Israel has some of the most advanced and successful companies in the world. They have the highest number of Nobel prize winners per capita.
Click to expand...

I never questioned the competence of Israeli people in doing business. Israel is just one of those countries notorious for their online frauds, I was merely suggesting that this is one of them.
B

This was invented in a university, protected by a worldwide patent, backed by a multi national company Lerox and has been in development for 7 years. If it's a scam then they certainly have put the work in.
C