Hair loss in children is typically caused by one of five conditions: Alopecia Areata, Tinea Capitis, Traction Alopecia, Trichotillomania, or Telogen Effluvium. We’d like to invite you to register and post your story and your questions on our Children’s Hair Loss Support Forums. Someone will be there to help you with your questions. 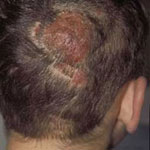 Tinea Capitis is a disease caused by fungal infection of the skin of the scalp, eyebrows and eyelashes, with a propensity for attacking hair shafts and follicles. It is also called “ringworm of the scalp”. The condition is caused by a fungus that invades the hair shaft and causes the hairs to break. The bare patch of hair loss is often round and the scalp takes on a black-dotted stubble appearance from hair shafts broken off at the surface. There may also be mild itching and scaling. The condition is transmitted by contact from one infected child to another through the sharing of combs, brushes, hats, barrettes, pillows and bath towels. Minor bruising of the scalp occasionally provides an entry for the microscopic fungus. Children 3 to 10 years of age are more susceptible and boys are more so than girls. Ringworm of the scalp is not dangerous. Without treatment, however, the hair loss can be considerable, and some children will develop a boggy, tender swelling of the scalp known as a kerion.

Following a high fever, flu or severe emotional stress, hairs that were in their growth phase can sometimes be suddenly converted into their resting phase. Two to 4 months later, when the child is otherwise fine and the stress is forgotten, these hairs can begin to shed. The shedding, which is actually a mass exodus of follicles from growth into dormancy, can last for up to 6 weeks. The hair loss is not total nor does it tend to show up in patches. It typically appears thin throughout the scalp. Unless the initial cause is repeated, all the hairs normally return (Telogen Effluvium explains why many mothers lose so much hair in the weeks following childbirth). Most parents who bring their child to the physician for this condition are worried that the youngster has cancer or another bad disease. Hair takes between 3 and 6 months to re-enter into growth phase, so the restoration can be somewhat slow. 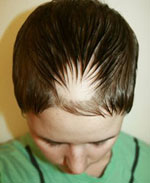 Alopecia areata is another common form of patchy hair loss in children. The typical story is the sudden appearance of one or more totally bald areas in the scalp. The child with this condition loses hair in circular patches sometimes up to two inches in diameter. The hair at the borders of these patches is loose, but the peach-colored scalp looks and feels normal, without scaling or inflammation. There may be just a few patches of hair loss or a total absence of body hair. Alopecia Areata is not life-threatening, and children who have it are otherwise healthy. Why the hair falls out from the roots is still a mystery. What is known is that the condition is not contagious, caused by foods, or the result of nervousness, hyperactive disorders, or psychological stress. In 20% of cases, another family member has been affected. Some patients with this condition will also develop a grid-like pitting of the nails. Fortunately, over 80% children with alopecia areata grow new hair within 12 months. Oddly, the new hair may temporarily be white, but eventually the hair returns to its natural color. This is a much higher resolution rate than is seen in adults with the same condition, so the news is good.

Traction Alopecia, or physical damage to the hair, is another common cause of hair loss, particularly in girls. The human hair is quite fragile and does not respond well to the many physical and chemical assaults it has to endure in the name of beauty. Constant teasing, fluffing, combing, washing, curling, blow drying, hot combing, straightening and bleaching can do a number on the fragile hairs, causing them to fall out, especially around the hairline and along the front and sides. In adults, this is not as frequent a problem, as the hair has grown in strength and quality over several years, but it can pose a problem for our little companions who typically have much thinner, fairer and less dense hair. Styles that apply tension to the hair, such as tight ponytails, braiding, barrettes and permanent waving can also damage the hair. However, one should not assume that hair loss in one’s child is due to pony tails that are too tight. If hair loss is noted, it is imperative that a physician evaluate the child and rule out other causes. Recommended treatment for children’s traction alopecia is to handle the hair gently, as little as possible, and use natural hair styles. The hair will usually return, but regrowth can be slow. Injured hair follicles do not heal quickly and often take 3 or more months before they are back to their growing phase.

Trichotillomania is the compulsion to pull out one’s own hair. It results in irregular patches of incomplete hair loss, mainly on the scalp, but may involve the eyebrows and eyelashes as well. The habit of pulling out one’s hair is usually practiced in bed before falling asleep or when the child is studying or watching television. Interestingly, parents are usually not aware of the habit and frequently find it hard to believe that their child would do such a thing. Affected areas of hair loss often appear on the left side of right-handed children and on the right side of left-handed youngsters. Most cases of trichotillomania resolve spontaneously. Diagnosis of this type of alopecia can be done in the convenience of your own home, by closely evaluating your child to see if they have this habit. The cause of this type of condition many times is related to stress, long term ongoing tension or other possible psychological or emotional deficiencies. The best treatment is to ignore the hair pulling and concentrate on why the child is anxious, nervous or frustrated.

Please use the tabs below to navigate to the next pages of this guide.

Please use the tabs to proceed to Step 1: Diagnose of the Children’s Hair Loss & Alopecia Guide.

Learn about the most common causes of hair loss in children, and help identify which form your child is experiencing.

Next Step 2: Finding a Doctor

Finding a qualified physician to diagnose and treat your child’s hair loss. What questions to ask, credentials to expect, and where to find one.

A review of the only proven treatments for reversing or stopping the three most common forms of children’s hair loss.

Step 4:  Get Support from Others

Connect with other parents who have found answers for their children’s hair loss.

Learn the different symptoms and appearances of children's hair loss...

Discover which doctors are best for children's hair loss...

Join the community today and get your questions answered...

Join over 50,000 Subscribers! Get the latest news in hair research and treatments.